I thought I would come here to update you all regularly on how the renovations were going, and possibly to show off some of the latest photos of things I'd made, but the truth is, I haven't made a lot recently, and mostly we are just hacking holes in the house...or so it seems! Of course, I do forget that we have also built two new extenions also!
Of course, we are in fact sorting out loads of boring stuff...the whole roofline of the house has had to be sorted. The window openings have to be remade, including new oak heads being put in.
We stripped the roof of all of it's slates and felt, only to find that the roof timbers which we thought were good, were in fact completely eaten by woodworm!
The quarry tiles in the hall and kitchen have all been lifted one by one....lots of them are broken...that was rather heart-breaking. They had been covered in concrete for years, and when they were uncovered, I had hoped they would be good, but as I have lifted each one, most of them crumbled. We are saving what we can.
We have a stone-mason working at the moment, and so far he has used 6 tonnes of lime mortar! That is just to rebuild stone walls....He's still not finished.
The roofers have the whole roof almost ready for putting the slate on next week...I can't wait.
The attic is looking so cool...I have ear-marked one room for a home cinema!
Today I saw samples of the cast iron gutters and down-pipes we are planning to use. They will most likely come primed and I will paint them.
Colm is raking out the joints in on gable wall, ready for repointing. He calls it therapy!
I spent yesterday scraping paint and bagging up rubble to carry it downstairs.
The two (4 flues) chimney have been taken down and rebuilt from the bottom up. The two for downstairs have been fully relined.
So you see...there is not a lot to show you...no big "ta-da" photos yet. I could show you lots of photos, but really, they would be just random bits of wall or roof, or floor.
This photo was taken just after the roof was stripped, and the new timbers were put on. The tarp you can see is covering the (restored) stairs!
I really find it hard to even take photos of these seemingly backwards moves...I know they end up as improvements in the end!

All in all, we are enjoying the whole process.


We had a family wedding at the beginning of April, and I made outfits for all of the children.
M got an Oliver + S Fairytale dress in Liberty Tana lawn.
T got a tweed wool waistcoat, shirt, cords and tie all from various Ottobre magazines.
R and B got Liberty O+S Music class blouses, and corduroy Music box pinafores.
I also made myself a capelet, but thought it would be hard to wear...how wrong was I! I loved wearing it, it sat nicely all day, and kept me just warm enough, whilst my arms were free to take photos, and sort out kids. 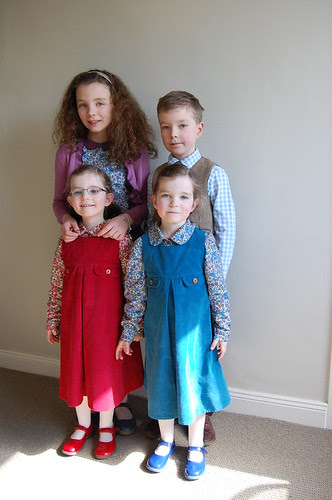 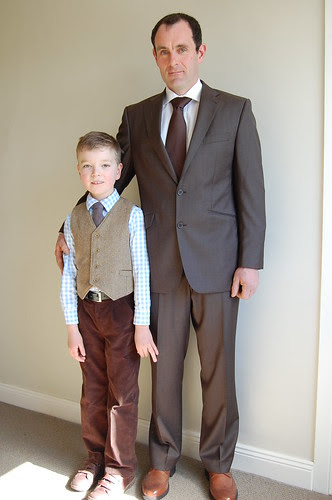 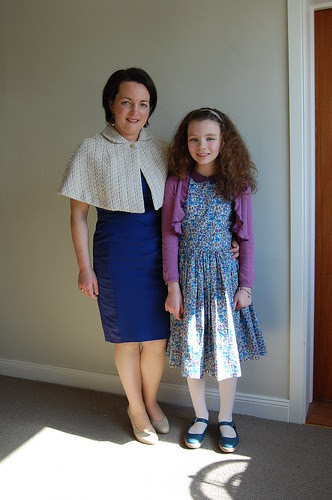 It was a wonderful day!
It was a great chance to get scrubbed up and forget about phoning people, ordering stuff and overseeing people at the house, although we were right back into it the next morning!
Posted by Millie at 21:17

I'm so excited that you're back to blogging. You all looked gorgeous for the wedding!

So nice to hear from you - I was wondering how things were going. Your capelet looks lovely; is it knitted, crocheted or a fabric? It looks very textural.

Millie! Glad to see you back! You all look gorgeous in those photos - I can't believe how grown up your kids are getting! Especially B&R! crazy how fast it all goes!
Looks like HUGE progress on the house - fair play to you!

I think the house is looking great - definite signs of progress

And love all your wedding pics :-)

Even if it's not to the big WOW stage yet, there is still plenty of progress being made on the renovation. Slowly but surely!

So much work has been done! Amazing! And I love, love, love that caplet you made for the wedding. Everyone looked so lovely. Well done on all of it.

I've enjoyed seeing your progress photos on flickr. Phew! What a lot of hard work you've done, but the house is looking amazing for it.

You look very glamorous in your wedding outfit!

It's good to see that you have a free moment to blog about all of the work you're putting into the house. I'm sure the final reveal will be worth all of it.
As for the photos, well...you look amazing! And the twins have grown so much since you last had photos of them.

Thanks Ana..the capelet is made using a reprinted vintage Butterick pattern, from a remnant of boucle fabric I bought at the Knitting and Stitching show, from Goldbergs (?).

Thanks Sadhbh! It is coming along, bit by bit.

I know you're right Cindy...I try to remind myself of how much we have done!

Thank you Sarah...after having been very unsure about the capelet, I love it so much now!

Thank you so much Joy!

Thanks Jen...We had such a lovely day at the wedding, it was great to celebrate something nice. I do hope the house will all be worth it one day!

I was excited to see you pop up in my reader! The house stuff sounds really complicated but you've made so much progress. And what a dapper family!

Aw...thank you Amanda! The house is coming along...the wedding was such a great excuse to dress up! We don't get many!