When I was 12 I headed off to boarding school...I was very shy and self conscious. I was joined by my life-long friend, Miss V. I can remember someone rushing in to tell us about this gorgeous boy who was in our year. I can still remember seeing him for the first time...he was so handsome. He wore almost white ripped jeans...I can still see him.
That was it, he was too beautiful to ever talk to...and so I didn't, or at least not that I can remember. In three years, I was too shy to get to know him. Miss V did however become friends with him. I left after 3 years and went to another school, Miss V stayed another year, and the handsome boy stayed the full 6 years in that school.
Many years later Miss V met the Handsome boy and his Girlfriend...they had bought a piece of land not too far away.."you must meet him" she told me...she also told me how beautiful his girlfriend was.....of course she's gorgeous I thought, but she's probably a total blonde bomb-shell..."all high-heels and hair-do".
The Handsome boy married his girlfriend, Miss V went to the wedding.
Soon after I had our twins, Miss V contacted me to tell me that she was bringing the Handsome boy to meet us at an event we were at one Sunday afternoon....I waited for him to arrive..
When he walked towards me, I knew it was him, he looked the same....but I was not overwhelmed. He was very pleasant, but 4 children stopped any great conversation, and it was all a bit quiet.
Soon after, we were to meet him and his wife at a charity fancy dress...I braced myself for meeting the dolly-bird. We didn't dress in fancy dress, but the Handsome boy and his wife dressed as Smurfs! They had their faces covered in blue face paint, so I still didn't know what she was like! But both Colm and I chatted to him for ages, after all, I wasn't 12 anymore.
We then made plans to visit them at their house.
I finally got to see his wife, without face-paint...and yes, she was 6ft, blonde, but so lovely. Not a bombshell at all..I think my son fell in love immediately, and my girls all love her too. She is so easy-going, and thoughtful.
As for the Handsome boy, well he's still handsome, but he is such a lovely person that I don't see his looks anymore! We have all become fast friends.
A while ago the the Handsome boy and his his lovely wife had a baby boy, he is so gorgeous...of course!
I made the baby this quilt.... 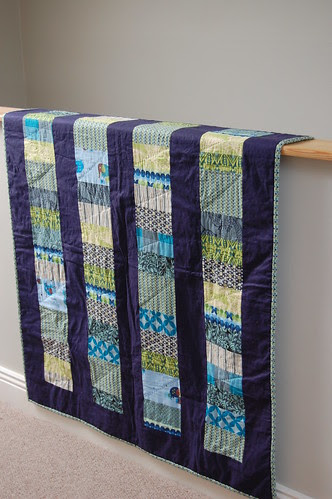 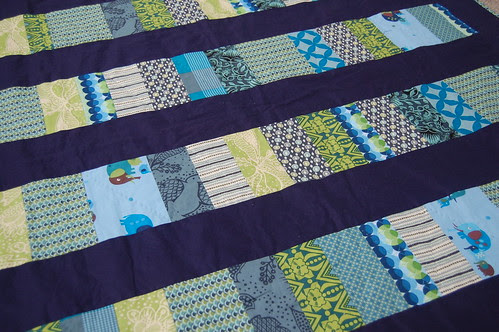 It was such a pleasure to make something for them, and him.

So the conclusion I have come to is that you shouldn't judge anyone as the person you were when you were twelve. People change...including me!

So when my cousin, from America, contacted my mother, to ask if he could visit, I was wary....you'd think I'd have learned!....last time I met him I was 14 and he was 16, that was 20 years ago. We got along fine, but I thought that he would find me dull, boring, and in a bit of a rutt, unlike him, who is very successful in his work. I didn't expect that we would have anything to talk about.
I was out on the farm doing my little bit of work, at my Mother's house when he arrived...I walked back to the house, my twins were inside, but I didn't rush in, like I usually do. I changed out of my boots and finally went in. He stood up and gave me a big hug, he looked the same guy. Just a bit older.
We sat and chatted for about an hour at her house, and when I suggested that he might like to visit our house later in the day, I didn't really expect him to say yes, but he seemed keen. So he arrived in the evening, and we chatted about the Grandparents we share, and my Aunt (his Mother) and his Aunt (my Mother), his brother and sister, and my siblings too. He chatted patiently to my children, and then met my husband, and shook his hand like he was really was pleased to meet him.
We talked for several hours....what had I been worried about!

It's a beautiful quilt and perfect for a handsome baby boy! I think reserving judgement is one of those lessons that we have to learn over and over. I certainly don't have it down yet!

The quilt is beautiful and I'll bet they love it! Your story is so familiar to me. I was also so shy as a girl and have the same issues when meeting people now. I am getting better!

What a beautiful and thoughtful gift! Such a feast for the eyes:) And you're not alone with these thoughts about others, and how they might perceive us. I fall into the same pattern...a few weeks ago I ran into an old friend with whom I went to school until we both went to university. She is now an investment banker with Credit Suisse in Manhatten, while I am....well! You know! A Stay At Home Mum with three kids who knits and sews and quilts and bakes...I hadn't even had a shower the day I saw her. I felt a bit grubby and kid-sticky:) Well, imagine my surprise when I found out from my mum that she had said, "It was so good to see Andrea...she hasn't changed! She still looks the same!" And continued to speak warmly about me for a few minutes.

I guess I shouldn't have been so worked up!

I feel like I could've written this post. I am very shy socially, and I often bow out of social situations eventhough I am often surprised how much I enjoy myself when I don't. It is funny the way the internet allows us shy (socially awkward in my case) people to socialize. I was nice to read your post it will inspire me to try harder!

On occasions , wouldn't it be interesting if we could have thought bubbles above our heads that others could see , shy people get so down on themselves , needlessly . I wish we could behave more like children :)
D'you want to play ? what's your favorite colour ? Pink ! ok ,lets be friends.

I love the story behind the quilt! It's funny how everyone changes. The quilt is so sweet, perfect for the handsome baby of handsome boy.

Thanks for that Cindy...maybe I will never learn...maybe that's not such a bad thing...and I will continue to give people a chance.

Thank you Heather...I think I'm getting better as I get older...and then I question myself all over again!

Andrea...indeed it seems that neither of us are alone! "Worked up" is exactly how I get in these situations. I'm glad you got to meet your friend, and that she still liked you!! Why wouldn't she!! It is a boost to hear it back via your Mother too.

Thanks Erica....That's exactly how I get...I avoid lots of things, but when I do make the effort I have a ball! I agree entirely about the internet.

Thanks Alexis...You're so right about being more like children, less inhibited, but I'd be afraid of what the speech bubble might say sometimes!

Thanks so much Jo...I need to remember that everyone changes, and matures! As for the baby.....boy, oh boy, is he a handsome baby...he's so gorgeous...(needless to say!)

such a lovely post and a beautiful quilt! I have just made my first quilt (chealted slightly by using saints and pinners cloud 9 quilt kit) but now looking at this, I am very inspired for the next one - it is truly love as is the story behined it :)
Belated happy birthday to your lil man, a gemini like myself :)

Thanks Winter Tree....I really enjoy making things for friends that I know will enjoy them. Not everyone one likes hand-made! I don't think it's cheating to use a kit! You still do the same amount of sewing!
Our twins are Gemini too!