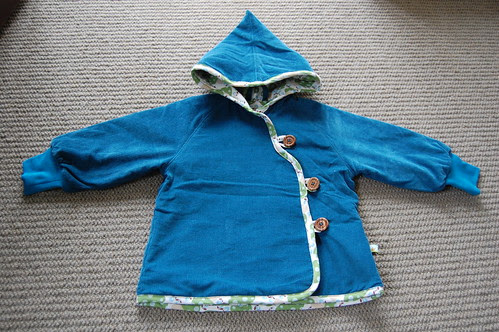 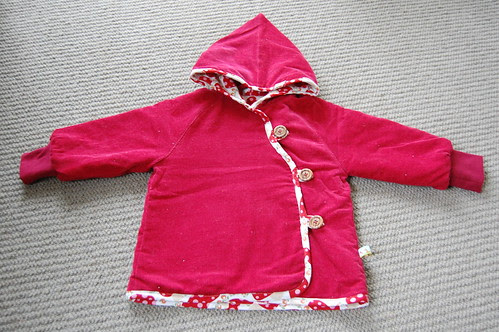 I have been slogging away at winter coats for the three younger children. T has been wearing the same coat to preschool and school for 3 years now, so he needed one badly. I made the girls two Sparrow coats form Ottobre 4/09. I made size 86cm last year and the girls are now 92cm and they just about fit them.

I made them size 92cm this year. I debated for a very long time about these. I ended up using some corduroy from Dots'n'Stripes. The lining is quilting cotton, I think it's by Hoody for Blank Quilting...long story about how I got it. 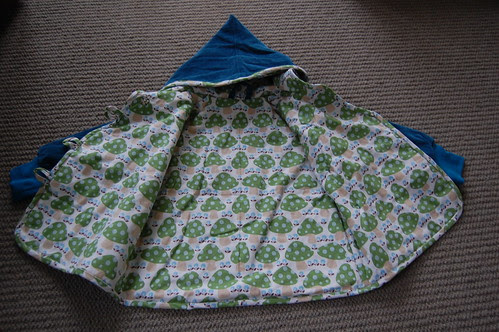 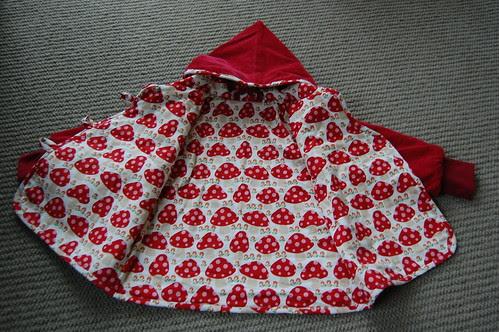 They are interlined with cotton batting. The ribbing came all the way from Finland from Myllymuksut. They have a massive array of colours of ribbing, amongst other things.
There are meant to be pockets in the front, which I left off. They are a bit puffy at the moment, but I'm sure the girls won't be long about knocking the corners off them. I love the pixie hoods on them. They make the tantrums a bit easier to bear!!!

Tadhg's coat is the Dennis Duffle from Otobre 6/07. The shell is an unknown fabric given to me by a friend, but originally from Fabricland (mind your eyes). She told me at the time that it was too green for her...I didn't know there was such a thing! 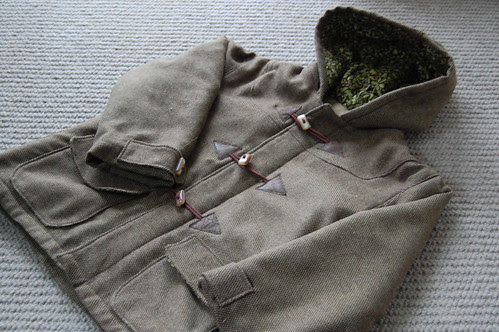 He loves it so much.... why wouldn't he be, when he hasn't had a new coat for 3 years...!
I made the toggles, I bought the buttons locally and used shoe laces and leather from my mother for the triangles. They should be more centred, but I'm hoping no-one will notice, I mis-judged where they should fasten and so had to move the 2nd side. It is lined with olive lining and interlined with wool (aka an old blanket). The hood, pockets and tabs etc are lined with quilting cotton, just a fat quarter in fact. I asked his opinion on it and he informed my it was a bit too Autumn-ish and not Wintery enough..it has acorns and oak leaves on it! 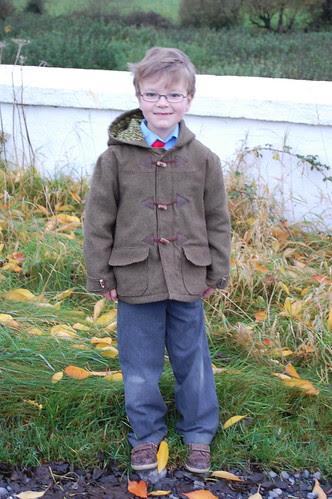 This is him waiting for the bus, to wear it to school for the first time. I told my husband how ridiculously excited he was and he reminded me that there are lots of kids who wouldn't wear anything hand-made!

PS...I forgot to mention the extra closure on T's coat. I retro-fitted a zip(per) to the inside of it, if I had considered it on time it could easily be added into the seam on the left I used the stitching on the right to sew it on that side. It just seals it all up a bit better, I think anyway.

Lovely coats!! Isn't it nice to wrap your wee ones in cuddly things you made yourself? Coats and PJs are my favorite (although here in Texas we don't get much call for the former.).

Millie, You've done it again! I *love* all three coats and once again, I'm WOWed by your creations.

Millie, you really make me wish I was having a girl, those coats are fabulous!

I'd say you've outdone yourself! These coats are just beautiful. Tadhg's coat is especially fabulous with those cool toggles and triangle patches. I think it is so very sweet that he loves it. Unfortunately, my kids are starting to NOT like the things I make them. :-(

Coats are my favourite too. Yours are absolutely gorgeous - especially Tadhg's. It's so hard to make boys' clothes special, but that coat really is. Love it!

Thanks Kid MD..I must admit that I really enjoy making their coats, like you say, you're bundling them up when they need it most...when it's cold.

Beachgirl...I'm honoured! Thank you. I enjoyed making them, but I must admit that I am glad to be finised them though!

Thanks Ana...that would be lovely, but I love the challenge of making boys stuff too...either way it'll be fun for you!

Oh no Heather, and I know how much you enjoy making for them. Thanks for the kind comment. I really enjoyed trying to work out how to make the fasteners for T's coat. It's all good for my brain, keeps it working!

Thanks so much Medrie...I thought of you with snow by Halloween, we don't even get cold enough for snow every year.

Thanks Kathryn...I agree about boys clothes. I was worried that the tweed would look grown up, but I'm delighted how it turned out.

What lovely coats! Isn't it especially fun to sew for twins? I will certainly tackle a project for mine - though a bit older but hopefully still young enough to be excited to wear what Mummy sews for them ;-)

Thanks Ellu...My twins are the reason I took up sewing clothes...I didn't want to dress them the same, but didn't have time or patience to trawl the shops for co-ordinating clothes. My two have started telling people who admire their clothes.."Mummy make it".

Oh Millie, I hope that one day I'm as skilled as you are and can make Pelle a coat like that. In my view, being able to make coats is the real prove you're a true seamstress. I'm not there, yet. At the moment, I'm making him an anorak, with the help of my teacher.
That will be one sport up the ladder leading to sewing whalhalla.

The coats are fabulous!
And I love the tantrum picture - just a slice of reality (:

they are all beautiful!
I have been eyeing off that duffle for next winter..you have inspired me!

Millie, those are lovely coats! And I love that picture of your son proudly wearing his. He has good taste, and a good heart to appreciate (and be excited!) about wearing the coat that Mum made. My plan to make fall coats just went out the window because it is now winter and fall coats would be utterly useless here. So now I might have to investigate new and warmer interlinings or else give up altogether. Cotton batting- thanks for the idea. I shall accost the staff at JoAnn's and make them tell me what I should buy.

Oh Ria...I am far from a skilled seamstress! I just go for it and hope for the best! It really was not a very difficult, it just had quite a few stages. I will watch out for Pelle's new anorak.

Thanks Nicole! The corduroys are great, very intense colours.

Thanks Joy...and reality is right!

Thank you Zofia..I'm glad I could do a bit of inspiring. It's a great pattern.

Thanks LiEr...He really is a great boy! I love that he is proud and excited. I usually give him a choice of several fabrics, and he choses his own. I just used quilt batting, nice fluffy cotton stuff. "Warm and Natural" I think. I don't know how warm it will be, but my little ones usually have several layers on anyway. I have seen Medrie used Thinsulate interlining in her snow-suit. Good luck at JoAnn's!

this coat of your son is totally my style! love it. and well done.

Thanks Hetty..I noticed your daughter had a lovely duffle coat too!

Oh, Millie - these are incredible! What a beautiful job, you've done! I'm in awe! :)

Oh, thank you Astrid, you're very kind. I had fun making these, especially T's.

Wow! Those coats are absolutely adorable. Would they be considered fall or winter coats? Around here (I live in Michigan, in the States on the Canadian border) we have much thicker, fluffier winter coats, as it gets down below 0 F sometimes. I would love to make myself a winter coat, but I'm not sure that my machine could handle the heavy wool, lining, and thick filling. Thus I'll have to content myself with the fall/spring cape that it my current project.

Thanks Val...I suppose these would be considered Fall/Autumn coats. They would be warm enough for our coldest weather with an extra fleece underneath and mittens and hats.
I worked out that our coldest weather for many years was last winter, it got down to -7 celcius, which converts to 19.4F! Almost balmy be your standards!
Sorry I can't help more, I know Medrie made her boy a suit with thinsulate interlining, maybe that might work?

These are very impressive! I love them!

Holy moly, Millie!!! I have just read back a few posts here and I am so in awe of you! How on earth do you find the time to do all this incredible sewing with four children?
I have four children and cannot imagine finding the time, though mind you, my Mum had five and made all of ours, and her own clothes too. What am I doing wrong!
Fair play to you. You are amazing!

Ps. Your children are adorable, and your gorgeous little boy reminds me so much of my eldest when he was little. (He is now taller then me! *sniff*)

Thanks Ciara...how kind of you to say! I hardly ever watch TV before 10pm, and neither does my husband, which helps! Other than that I just enjoy sewing, It gives me a creative outlet, with a useful end result. I would crack up if I couldn't do things with my hands.
As for my kids, thank you...they are great, (nearly all the time!)My boy is such a complex character, but yes, lovely...I dread (kind of) the day when he is taller than me!

Hi Millie, I have twin girls too! They are much smaller than yours... so maybe... when your cuties grow out of those AMAZING coats they might wing their way to my girlies ;) ;)
Just chancing my arm! Your work is incredible. I am so impressed! S

Sadhbh...I know, I saw the piece you wrote about the TG4 programme and watched it...what lovely girls you have.
The girls just managed, this morning, to get their hands on some paintbrushes in White Spirit and covered the new coats in it...they're in the wash now...fingers crossed! If they stand up to all the wear and tear my girls give them, I'll give you a shout!!

Wow, these coats are beautiful! (After you commented on my blog that you had just made jackets for your kids, I just had to see if you had pictures of them on your blog.) I've heard a lot about the Ottobre magazines. It looks like I'm really going to have to get my hands on one. Thanks for visiting my blog!

Oh..thank you Katie! The coat you made is really lovely too....I would highly recommend Ottobre...I find it great for making things for my 4 children, because there are multiple patterns in multiple sizes. The fit is really accurate too, which is very important. Thanks for visiting here too.

Just lovely!!! those are some of the prettiest, cutest coats i've seen!! and your kids are adorable Millie!!

If imitation is the sincerest form of flattery....consider yourself flattered. I'm almost finished with a very similar coat for my girl. She picked the pattern out of several choices offered because of the hood...then I remembered your coats posted on flikr. I also went with a solid cord and cotton lining. I used fusible fleece to line them but it seems a little stiff and "bumpy." I'm hoping that will improve with washing and wearing. BTW....your son is adorable. I echo that it is so nice to see great garment sewing for boys.