Last December the children's school was shut due to very heavy snow.... so I decided to start a new quilt. I know...why on earth!
I ordered some white fabric, from Rags for Linda, which my trusty Postman brought, despite the snow.
(My Postman was off work for 9 months the previous year, after he had a slipped on ice and broke his pelvis.)
I had decided to make the Tokyo Subway Quilt, which is a free pattern from Oh Franson. I started cutting and piecing the little 2.5 inch squares. There are 25 blocks, and each block is 8 squares by 8 squares. That's 1600 sqaures in case you're wondering. 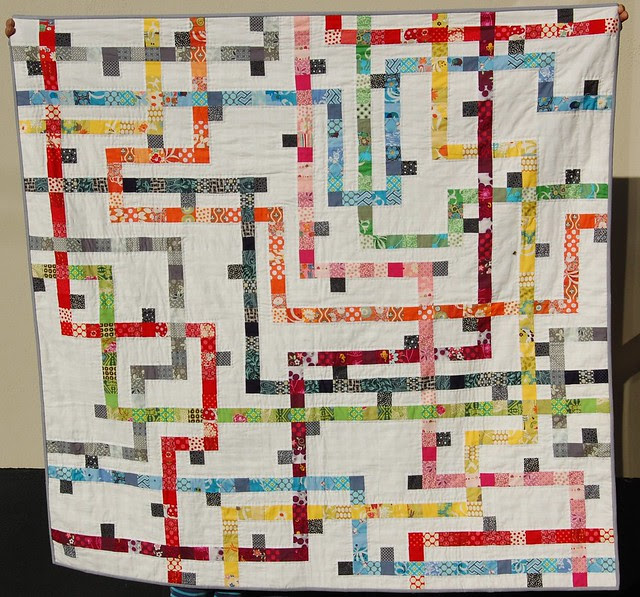 I am not a very precise sewer, so it was a real challenge, but I think I improved as I went along.
As the snow melted, I worked on this in fits and starts. The problem was that you needed to leave the stacks of squares set out as you worked on them, and I kept knocking them over! I eventually got it all pieced, the backing pieced, and then got it sandwiched. At that stage I put it aside for a while until I worked out how I would quilt it. I don't have a walking foot on my machine, and was really afraid to try the straight line quilting the pattern suggested. So I eventually took the bull by the horns and started hand quilting.
I used some quarter inch tape as a guide and sewed inside each of the coloured lines. 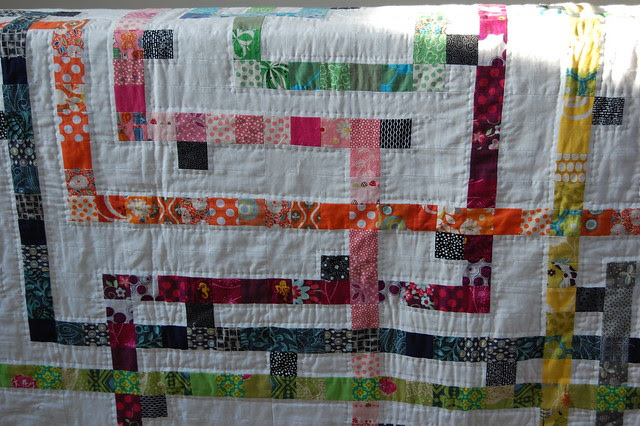 I rather like the back...I had cut several extra squares, for various reasons, and when the white cotton piece I had for the backing was too small, I pieced the spare squares and added a strip of Ikea heart cotton. 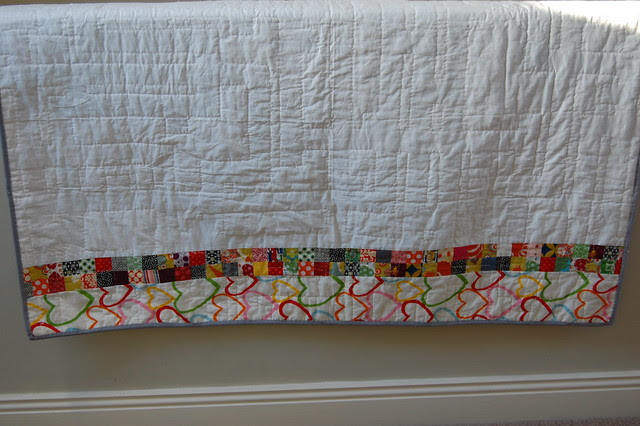 The plan is that this will hang ustairs in our landing/reading area. I hope the children will enjoy looking at it, as much as I do..it is rather mesmerising to follow the coloured lines, and how they go under and over each other.

As usual I am looking for advice too....as I mentioned, I do not have a walking foot on my machine, and I have found one that will fit my machine, but I have been told that for a walking foot to work well, that a machine should have one kind of built in, rather than a retro-fitted one, like I would be doing....anyone added one to their machine at a later date, and if so, does it work well?
Posted by Millie at 10:08

It is gorgeous Millie! What an accomplishment!

I have a nagging desire to try it too but I realise it will have to wait. But as with most quilting ideas - they will keep. It's not like sewing for kids where they may outgrow what you want to make.

It's such a pretty quilt. The white background makes the color tiles pop. You did a fabulous job putting this together!

I'm not sure about the whole walking foot thing...mine came with my machine.

You've inspired to me to finish my first quilt started almost 20 years ago!! Impressive and beautiful! Now I want to make one!

This quilt is just gorgeous!

What a beautiful quilt!
I have a walking foot that you add to the machine as needed! Although I'd love a built-in one I can't see that it's essential! Go for it!!

WOW! Millie, that is just gorgeous. Well done. I'm always impressed by what you accomplish, but this just takes the cake:) Great job!

Really pretty, Millie. This would be a neat way to use up scraps....maybe something for me to think about, lol! I'm working on a quilt myself right now - a baby quilt for my new little niece.

How did you like the hand quilting? I do all of my quilts by hand, since it lets me do something while watching a DVD or one of the few shows I watch on TV, and it's portable so I can take it with me to the doctor or dentist and work on it while I wait.

Beautiful! Well done for the handquilting it!

I had been eyeing that pattern for a while, but all those tiny squares put me off!

B.t.w. the start of your story made me think you were going to give it to your postman!

Hi Millie. I love your quilt!

I treated myself to a walking foot when I got my Janome. They're pretty pricy, but they do seem to make a difference. I've never heard of them being built in though.

This is amazing! It must be very satisfying to look at it (now that it's done!). I'm working on a quilt that I might hand quilt when it's done...60 years from now. By then I might look for a proper walking foot!

My mind boggles at the thought of all those little squares.

This is a truly stunning piece, Millie! (Almost makes me want to make one - almost!)

You clever clever lady! What a wonderful thing, so impressed. I am making a hex quilt at the mo and it's a real labour of love.
Love this so much! Ali xx

Thanks Lotta...I know what you mean about the clothes! I usually have one quilt on the go, to pick up if I am between other projects.

Thank you Cindy...White is not the easiest colour to work with! I was so afraid I'd ruin it with a mark from my iron!

Thank you Sarah...Go for it..your girls would love it to snuggle into!

Thanks Erica...and that is interesting about your walking foot. I think I might buy one.

Thanks Gill...and thanks too for the advice...it sound like the guy might have been trying to sell me a new machine with built in walking foot!

Thanks so much Sadhbh! Very kind words indeed!

Thanks Jen...it is a great way to use up scraps, and special pieces you're afraid to use! I must admit that I love hand quilting, like you, I do it in the evenings. I have hand quilted most of the quilts I have made...but I would like the option to machine quilt baby gifts etc.

Thank you Thirza...don't be afraid of the tiny squares, just don't be in a hurry if you do make this quilt!
I do love my postman, but a few quid in an card at Christmas is all he'll be getting! You made me LOL!

Thanks Ana...interesting about your walking foot too.

Thank you Joy...I am looking forward to seeing your quilt...it won't take you long...I know how much stuff you make!

Thanks katherine h....the only really good thing about hand-quilting is that you can do a little and put it down. I did a little each night (if I felt like it) and slowly but surely it got done.

Thanks Ali...ooooh a hex quilt! Now that is a labour of love! I have only done a little hex project, but it was fun.

Right it is now officially confirmed, you are my hero! What a gorgeous quilt.

Yay! I can finally comment!
Its gorgeous Millie you are so clever!

Thank you so much Kath! I am honoured!

Thanks Nicole! You're very kind!

Oh, my, Millie -- that is spectacular!

Thank you so much Medrie!

I'm late to the party, but that is Stunning! I've seen the pattern before, but never worked up the nerve to try it. Well done!