A little while ago I had a big clear out of clothes from my wardrobe. I had several things in it that were never worn because every time I put them on, (outside of the shop where I bought them with a shop assistant telling me they looked great!) I never felt comfortable....so I just put them in a black bag and donated them to a charity shop. It felt good to think that I wouldn't feel guilty for buying them in the first place.
I also got rid of several skirts bought cheaply in chain stores, that were too long or a bit big in the hips. However they were good basic colours, like black and brown, so getting rid of them left me short of skirts.

My husband's older brother was 40 a little while ago, and yesterday was his party. It was combined with an early Hallowe'en party for all of the children.
I decided to make a blouse/shirt to wear out of some retro yellow floral lawn fabric that I've had for a long time. I have had mixed luck with this pattern, but I decided to chance it..the pattern is #44 from Ottobre 4/2004. I am very pleased with how it turned out. I did end up taking the sides in a couple of inches, but I left this until I had the whole thing made. I tried in the past to do it while making it, and failed miserably! 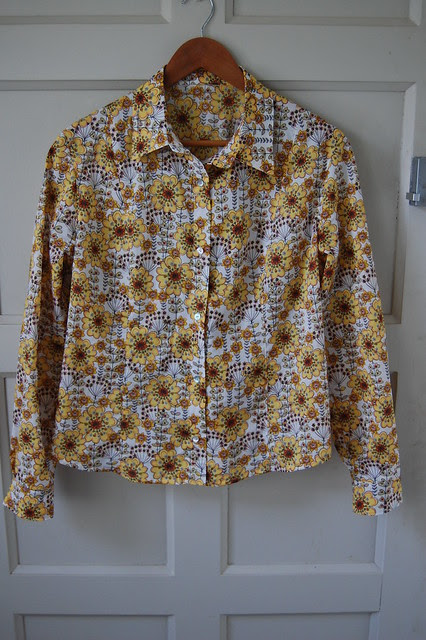 I then decided that I "needed" to wear a skirt with the blouse...so I made this skirt from some stretch denim that I had in my stash. It is #9 from Ottobre 5/2007. The denim is a tan/black cross-weave (also from my stash), so I thought it would need to be worn with black boots, but brown boots are good with it too. Win-win! 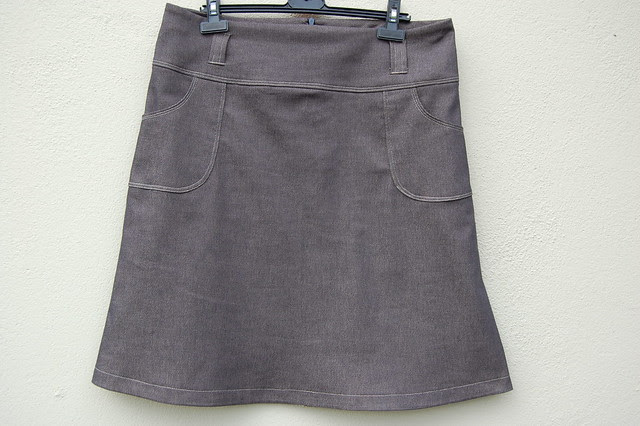 There are several skirts in this Ottobre issue, and they use the same basic pieces. I made one for my mother a while ago, and had to take it in lots. I forgot that until I was making this one...I had to take it in about 4 inches in the waist! 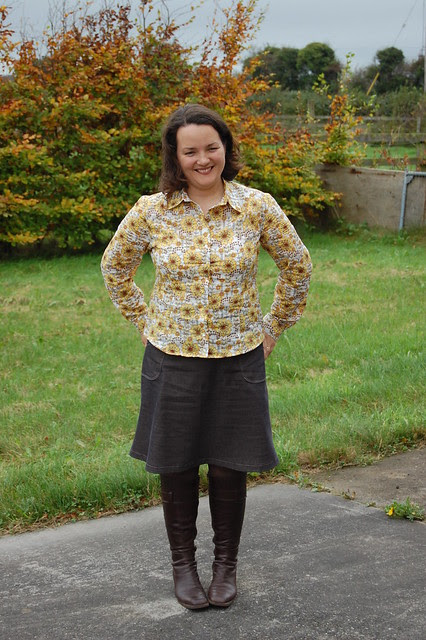 The skirt is so comfortable...I wore the whole outfit to the party yesterday, and felt pretty OK!
I will of course wear them separately most of the time.

Last but not least...the children dressed up for Hallowe'en...well 3 of them did. They decide to all dress as pirates, and the eldest two rooted out some stripey tops from my box of clothes to be re-cycled into new clothes. Good job I'm not so good at getting around to that! 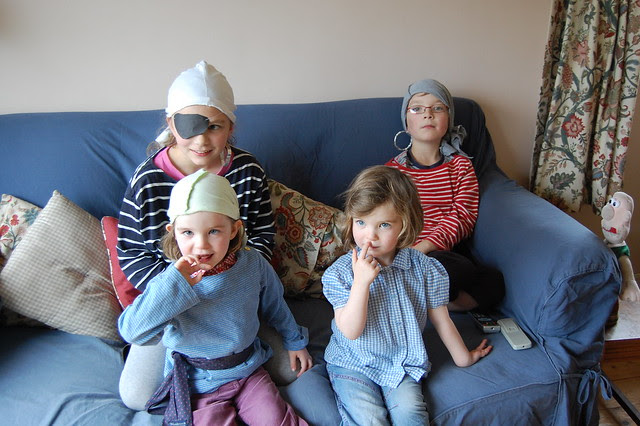 She's not picking her nose btw!
Posted by Millie at 08:26

Labels: Ottobre, sewing for me, stash

Millie, your outfit really is fabulous - I love both the shirt and the skirt and they work so well together!

All your sewing always makes me want to rush off and buy the patterns (- and I often do - lol!)

Hi Millie. I really like that skirt, I imagine it would look great in a fine corduroy too.

Both lovely, and the skirt especially so - the perfect length and very neat and chic.

That shirt and skirt are fantastic! I never would have thought of putting that floral fabric and that shirt pattern together. Such a great result and the pieces balance each other nicely.

It's a fabulous outfit, Millie!

Millie, you look SO BEAUTIFUL in that outfit.

Happy Hallowe'en to your pirate crew!!

Cute outfit! i especially love the pocket detail on the skirt. Nice to be able to have a choice of boot colour.

Fabulous!
I love a good party AND a new outfit!

Thanks Ana...the one in Ottobre is made from corduroy, and it is lovely.

Thanks Jane...I am pleased with the results.

Medrie...that is so kind of you to say. Thank you, and Happy Hallowe'en to you too, especially your little man!

Thank you Katherine h...the pockets are great, my kids always need to me carry something for them!

Thanks so much Nicole.