Every once in a while a pattern comes along that I just fall in love with....the Patterns by Figgy's Fiona pinafore pattern is one of those!
I had been eyeing it up for a long time, and when I finally caved and went to buy it, I spotted that it was also available as a PDF...yay! Instant gratification!
I printed it all out, traced a size 4/5 and asked the girls about which fabrics they might like...you see, my 3 year old twin girls would really rather not dress like girls...they do however, need at least one dress each, which they can wear to special occasions.
So, anyway, they agreed on some fine navy corduroy, and some fine grey corduroy. For the contrast the agreed on some Liberty for the V&A, which I bought a while ago. 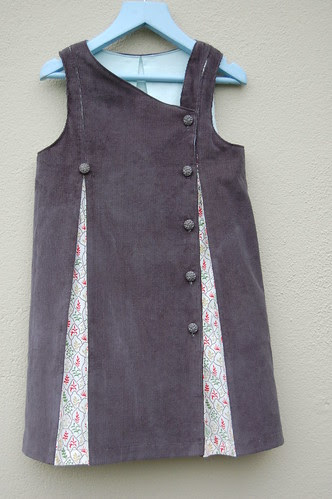 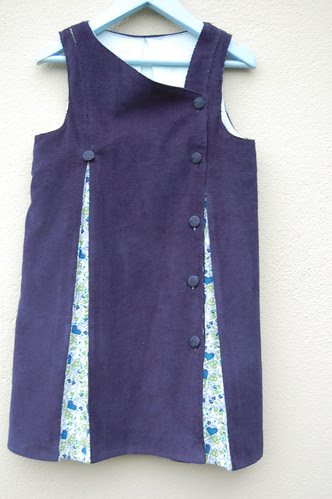 Neither of the fabrics is floral...they appear to be floral, but on close inspection, they are not...so it's kind of win-win! Floral is girly, don't you know!
The dress goes together in a very interesting way...very hard to explain, but I learned several new techniques...never a bad thing!
I used some buttons from my recent buttons buying spree!

I must admit that I love the back nearly as much as the front...not often that happens...... 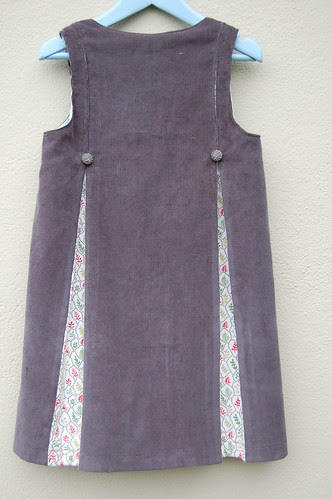 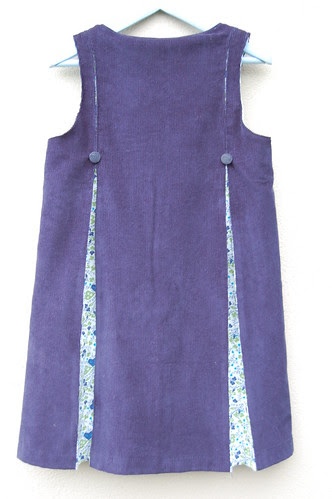 Adorable! I love the fabric combos and the buttons!

So lovely! I like that they are pretty but not super girly, and you're right - the back is as well designed as the front. I think what I like best is the way the crossover in front is designed. Are the twins really that big already?

Thank you so much Carolyn!

Thanks Nicole...I felt like doing a bit of spring cleaning...it's Spring with you now, right?!

Thank you Medrie...it comes with a boy's vest pattern too.

Thanks Jen...The twins were between a 2/3 and a 4/5 and I emailed Shelly, and she suggested that I go a size up. They are to be worn over tops for winter, so I wanted them roomy. They are 3 and a half now, and 98cm, so probably average. The cover photo shows the dress over the knee, I wanted it longer, so they could get more wear, and indeed they are quite long, maybe mid-calf.

This are gorgeous! I bet the twins love them - are you going to make more??

Just gorgeous. I can see why you love this pattern.

I have been eyeing this dress as well, yours turned out beautiful!

These are adorable! I really like the slight asymmetry in the front.

Thank you Gill..."Love" would be a bit strong, but the twins seem happy enough that if they have to wear a dress, then these will be ok!
I would definitely make more again...maybe in the smallest size as a gift. If the girls wear theirs, I will make them more.

Katherine h...thank you. It really is a lovely well written pattern.

Thanks Rachel! I hope you get yourself one!

Thank you Joy! I love a bit of asymmetry too. I had to think hard when cutting out the lining and top layer though!

I spotted that pattern in the Figgy's flickr group a while back - it's not often that I see a pattern that makes me wish I had girls instead of boys, but that one is definitely one of those! Your cord versions look absolutely beautiful, and love the use of the Liberty prints.

Thank you Jo! I must say I am lucky to have some of each! I find the boy clothes challenge me more....in a good way.
I love the things that you make your boys.

SO super cute! My girls would love them. I love the buttons and the pleats. What a neat pattern!

Thank you Andrea! It is a neat pattern, that's for sure. I am smitten!