I finally finished my second Colette Parfait...it took a while, but I really wanted to do a proper job, and not my usual ..."ah, sher (sure), that'll do" job. As I have read several times, the second Parfait goes together much easier than the first. This is very true. 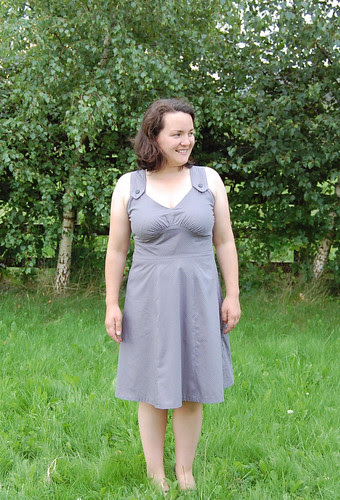 I had some fitting issues again, especially under the arms, I'm not sure they're quite perfect still, but at least it fits. I made the front of the bodice a size smaller this time and left the back the same (a friend suggested that I probably have a broad back).....at least, I'd say!

I made a full lining for this one and it worked out well..I cut bodice and midriff pieces from the pattern, and I made a simple a line skirt for the skirt part. I hand stiched the understitching part. I had to interface the V in the lining at the front, it just kept losing it's shape as I sewed it. I'm not sure what the horizontal line across the bust is about, I never saw it until these photos...

I must also add here that if Sarai, the designer of Colette patterns, gives a tip on her patterns, you'd be wise to follow it! On each Parfait I made, when I put in the invisible zipper, it puckered..I took it out and interfaced along the place for the zipper and when it was sewn in it didn't pucker. (like Sarai said!)

I am very pleased with the dress. I am not sure about the bits at the front of my arm-pits. I think they look high, but then they cover the fatty bits there! Some other Parfaits that I see are looser there, but I don't think that would help me much either?!

Maeve took a photo of the shoes I plan to wear with the dress...they are sort of a mink grey.

In other news....Colm and I have been distracted by a new project...another one...I know!

It is a 1978 Toyota Landcruiser...in fact we have two...hoping to make one decent one. I am in charge of paint-stripping and rust removal at the moment...Colm is in charge of all mechanical and body work...I'm still undecided as to whose job is more important?!

C started it the other evening, after 10 years of laying idle in a field..it started no problem, but covered the two older children (who were sitting a bit away) in a cloud of black smoke and dust...all you could see were the whites of their eyes!!

Have a lovely weekend.

Your dress looks really good! Cute shoes, too. Best of luck with your vehicular endeavor! Looks like a lot of work but it sounds fun to me. I may not be right in the head though.... LOL!

Thanks Heather..the dress hides a multitude of sins! The vehicle needs loads of work, you're right, but it might keep us busy for a while!

The dress looks really lovely and together with those shoes it makes a perfect outfit. I hope Colm has already asked you out for a date!? :-) Good luck with your vehicle, it looks like a lot of work to me, but then, I haven't got a clue about cars...

Thanks Nicole, but to be honest, I think he's so tired looking at me trying it on, to check the fit, that I think he may not even notice me in it anymore...poor man! I do plague him for his opinions too!
As for the car, I don't know anything about engines etc...but I know how to strip paint!

Wow what a combination - dresses and cars. Hand me a piece of fabric and I'll be fine but I'd be lost with the car restoration. Great work Millie!

and a Happy Birthday for your special day. ;)

Very impressive!!!
I would love to see the car after restoration:)
Have a great long weekend:)

Thanks Monika...I hope your weekend is going well too.