We're still in full swing Celebrating The Boy.
I bought this fabric a while ago at Dots'n'Stripes..... 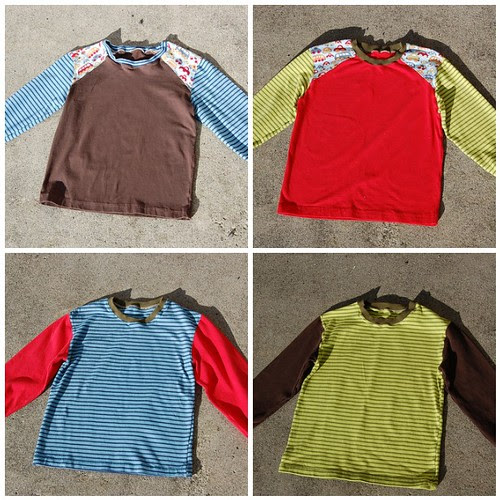 The plan was to try and make as 4 tops with only 0.6 metres of each of the 4 fabrics....I managed it...phew! I had a little to spare, but no allowance for cutting anything wrong. I had the small piece of the cars jersey from a previous top I made him. He's very pleased with them all. He needed new tops very badly......... He's getting so tall.

I also made him this hat from this tutorial . I would highly recommend it, for boys or girls. Blathin has decided that it is her hat, so it looks like I'll have to make her one, which means her Realtin will want one too!

I made this in about two hours, it was so fun to make, as I said highly recommended. The peak looks wonky in the first photo but it is just how he pulled it on! He's in his school uniform, in case you think I dress hin in a shirt and tie for fun!
Posted by Millie at 20:38

Too cute, bit hat and tops. I love the shoulders on the top two. I'll have to haul out my Ottobre and try that one for my own boy-o.

Thanks Kid MD, I'm very pleased with both how projects turned.....that's not always the case!

Your little man looks great with the hat! And the tops have turned out really nicely, it's amazing what can be done with only small pieces of material!

Thanks Nicole, He loves the hat. He has another one a bit like it, but in cotton. It has faded so much from constant wear, if he likes something, he likes it!
I'm sure the lovely fabric had something to do with the tops turning out well!

Love the tops and congrats on managing to make them with the small amount of fabric! Everytime I attempt something like that I cut something out wrong.lol

Thanks Beachgirl, Luckily the tops went according to plan!

Oh my gosh...adorable! My son would love to wear one of these Eddie Caps. Thanks for the link to the tutorial. I'm going to add this to the list of things to sew! :)

Amber, thanks for the kind comment. It is such a fun project to sew. I hope you enjoy making it too.

Oh you are great! Your boy must be so happy to get the attention and so many nice things to be sewed for him (whilst I must admit that I sewed some dolls clothes, lavender sachets, a cushion for me....) BUT I will sew for the little man very soon, I promise!

Oh Millie, how great, both the T's and the cap. I might make a cap for Pelle, too. I bought a pant with plaids at the second-hand shop (for 1,50 euro)that would be perfect for it.
Wishing you a good weekend,
Ria

Thanks Ladies. The t-shirt fabric has been waiting for the overlocker! He's wearing the brown one today. It looks handsome.

Nina- I think the best attention he's got was his new hair-cut, it was quite long until tuesday when I cut it for him, He lapped up the one-to-one attention!

Ria- Plaid sounds perfect. I look foward to seeing Pelle's if you make him one.